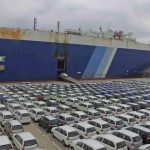 But what is interesting is the export of CBU because it has been produced in the form of a whole car unit. Citing CBU export data released by the Indonesian Association of Automotive Industries (GAIKINDO), cars that are exported abroad vary. They are SUVs, MPVs, and pickups.

Based on GAIKINDO data, total car exports in the January-August 2018 period totaled 161,120 units. June and August become the highest export peak so far this year until August 2018.

In June, Indonesian car exports totaled 25,159 units. While August exports were 23,559 units. January-June exports of cars did not reach 22,000 units per month.

About the model, the Toyota Fortuner is the most widely exported Indonesian car. In August 2018, Toyota exported 4,849 units of the Fortuner. In the second position, Toyota Rush exported 3,908. Then Mitsubishi Xpander was in third place with an export figure of 3,735 units. While Toyota Avanza is in fourth position. The Toyota million car was exported by 2,717 units. (*)