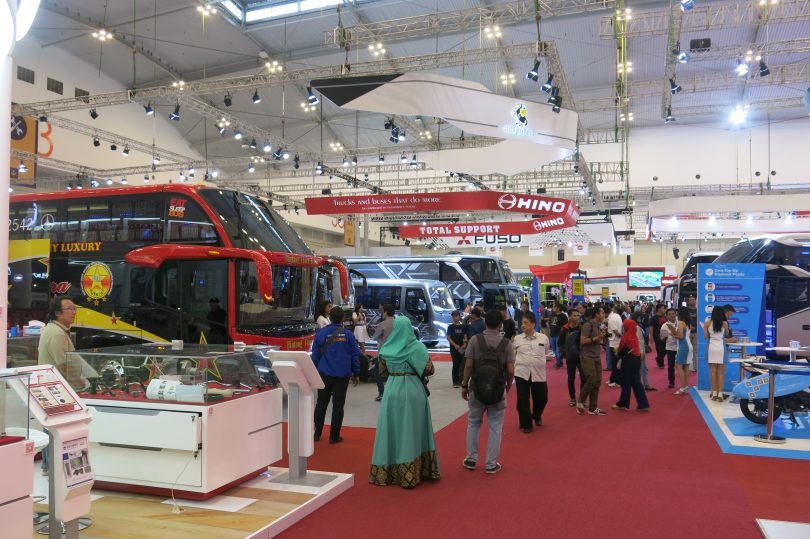 HINO
PT Hino Motors Sales Indonesia (HMSI) carries the theme of Trucks and Buses That Do More, Be Connected to Customer’s Future, which is translated through a booth covering 1,040 square meters by displaying eight models of trucks and buses. HMSI introduces Hino Bus Poncho EV (electric vehicle) or electric-fueled buses which are environmentally friendly, emission-free and CO2-free buses. In addition to electric vehicles, Hino also displays Hino FM 360 Tractor Head gas-powered or compressed natural gas (CNG) trucks that have a large power, which is 360 PS with a maximum torque of 125 per 1,200 kgm/rpm.

ISUZU
With the theme Always Next to You, PT Isuzu Astra Motor Indonesia (IAMI) presented line up products that varied, ranging from pick-up trucks to medium trucks, as well as Isuzu mu-X passenger vehicles and Isuzu D-Max at the 2018 GIIAS event. To strengthen the chosen theme, IAMI presents the latest commercial vehicles that are full of innovations that can facilitate operational activities for a number of business people in the country, namely Isuzu Elf NMR 81. This is a six-wheel light truck that uses the first common-rail engine in its class.

TATA MOTORS
PT Tata Motors Distribusi Indonesia (TMDI) a subsidiary of Tata Motors Indonesia showcases a number of new commercial vehicle products that can be found in Hall 3A. TMDI launches commercial vehicles with the latest models such as Tata Prima 3338.K, 8 × 4 trucks that are the new mainstay of Tata Motors in construction, mining, and logistics. Its presence complements the Tata Prima line of other series such as Tata Prima 2528 LX in the medium heavy duty truck segment for mining, logistics, and construction.

UD TRUCK
UD Trucks comes with a number of new commercial vehicle products that are expected to strengthen the contribution in the logistics field. UD Truck exhibits Quester CKE250 WB6000 variant products equipped with cooling box and CQE280 WB5800 which features boogie lifter and flexible chassis which makes the vehicle sturdier.
In addition, UD Trucks also launched Kuzer products in the RKE150 WB3850 and WB3350 variants also equipped with a common rail system. Coupled with the cruise contro feature that helps the driver maintain the speed of the vehicle without having to step on the gas pedal while driving long distances. (*)