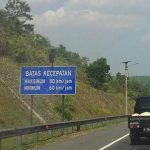 JAKARTA— The culture in using toll roads apparently has not been well understood by most of Indonesian people living far from big cities. A transportation observer of Catholic University (UNIKA) Soegijapranata (Semarang) Djoko Setijowarno assessed that there are needs to education for toll road users. One of the violations that seems trivial but always happens repeatedly and can have an affective effect is that many drivers disregard the maximum and minimum speed limit rules.

What’s worse, there has never been legal action against such traffic violation. “Even proudly, toll users would go at high speed, like a race circuit highway,” Djoko said on Sunday 3rdMarch 2019.

He concluded that such condition has led two traffic accidents on the toll road recently. The first occurred in KM 349 Tol Batang (Central Java) resulting in a casualty. The incident involved a vehicle carrying the Regent of Demak. Another fatal incident at KM 604 Tol Madiun (East Java) caused the loss of three lives immediately.

The already connected Trans Java Toll Road is expected to facilitate easier logistics. Unfortunately, most freight trucks in Indonesia are not prepared for high speed. Especially when they are loaded with goods, the speed would fail to exceed 40 kilometers per hour.

On the other hand, the Ministry of Transportation has issued Ministerial Regulation No. 111 of 2015 on Procedures for Determining Speed Limits. The regulation on speed limit is intended to prevent accidents and fatalities, as well as to ensure traffic flow.

Djoko said that the enforcement of the traffic rules is due to take effect. He said the toll road also needs to be equipped with a speed camera to help traffic police commit act against speed limit violators. “Education for toll road drivers needs to be encouraged. A comfortable toll road can lead to micro sleep,” he said.

He suggested, every two to three hours driving on the highway, a driver must rest to take a break for 30 minutes. Vehicles also need to rest to avoid tire breaks. Driver’s working time is also regulated in Article 90 of Law Number 22 Year 2009 concerning LLAJ, which is eight hours a day. “If you drive four hours in a row you must take a minimum of 30 minutes to rest. But in certain cases you can drive at least 12 hours a day, including a one-hour break,” he said.

For bus and truck cars, the Directorate General of Land Transportation has issued an additional regulation on the Light Reflection Tool (APCT). But this will only start from 1stMay 1 2019 for new bus and truck cars and from 1stSeptember 2019 for cars and trucks that are already operational. The APCT is hoped to help reduce crash from behind, especially at night. “Toll roads are built for the flowing mobility of passengers and goods. Toll roads are not a circuit of car racing, surely they cannot arrive safely at the destination of the trip if an accident occurs on the way,” he said. (*)