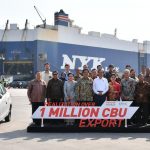 JAKARTA— RI government boosts the value of exports of manufactured products in an effort to improve the national economy. This is in line with the implementation of the Making Indonesia Road Map 4.0, where one of the targets is to increase net exports by 10 percent of gross domestic product (GDP).

“At the roadmap, one of the sectors that is being prioritized for development is the automotive industry. The target is that Indonesia is expected to become a vehicle production base for both internal combustion engines (ICE) and electrified vehicle (EV) for domestic and export markets,” said Industry Minister Airlangga Hartarto in Jakarta, Wednesday, September 5 2018.

Minister Airlangga said that his party gave appreciation to PT TMMIN, which since 1987 had managed to export 1.4 million units of completely built up (CBU) vehicles. “This success is also marked by the achievement of the export target of CBU cars for the first time in 2018 through the figure of 200 thousand units per year or about USD 3 million,” he said.

The Ministry of Industry noted that PT TMMIN’s export trend for CBU vehicles continues to increase every year. In 2016, exports totaled 169 units or valued at USD 2.1 million, up to 199 units (USD 2.6 million) in 2017. “This shows our manufacturing stretch is growing and the confidence of our industry actors is high,” said Minister of Industry.

The positive performance of the Indonesian manufacturing sector was seen through the Purchasing Managers’ Index (PMI) from the results of the Nikkei survey, which showed Indonesia’s PMI in August 2018 touched a level of 51.9 or accelerated compared to July achievement of 50.5. The PMI above level 50 indicates an expansionary manufacturing sector.

Airlangga added, it continues to expand the export market for the national automotive industry. Therefore, facilities for fiscal incentives are needed to spur vehicle production to suit global consumer tastes. “For example, we are pushing for increased export of sedans and taking opportunities to Australia,” he said.

Meanwhile, for CBU vehicles the Toyota brand produced by PT TMMIN has been exported to more than 80 countries in Asia, Europe, Australia, Africa, Latin America, Caribbean, Middle East and Pacific. “Currently, as many as 1,879 CBU units from Toyota will be sent to Bahrain, Bangladesh, Laos, Myanmar, Peru, Qatar, Saudi Arabia, Thailand, the United Arab Emirates and Costa Rica,” he said.

The Minister of Industry ensures that the capability of the national automotive industry is currently competitive and the manufacturing structure is increasingly deep supported by many domestic component industries. “So, Toyota’s production in Indonesia, the local content level is very high, reaching 75 to 94 percent,” he said.

The Ministry of Industry also appreciated the investment commitment of Toyota Group so far in Indonesia, especially after President Joko Widodo’s visit to Japan’s Toyota Motor Corporation in 2015. From 2015 to 2017, Toyota Group’s investment value in the country reached Rp 20 trillion. From the investment, PT TMMIN has absorbed 8,425 work forces. (*)