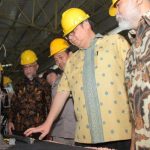 KLATEN – Small and medium enterprises (SMEs) continue to have a place in the development of the automotive industry in Indonesia. One of them is an SME at a village called Ceper in Klaten Regency (Central Java) which is incorporated in the Batur Jaya Industrial Cooperative (KBJ). This SME produces cylinder sleeves to be supplied to PT Toyota Motor Manufacturing Indonesia (TMMIN).

In the launching of “IKM in the Automotive Industry Supply Chain“, Minister of Industry Airlangga Hartarto said that this success was due to a commitment and seriousness of the cooperative in encouraging the SME. The cooperative has made many changes to business development, so that it is able to enter the supply chain of the automotive industry.

“Today we all witnessed the fruitful achievement of the commitment and seriousness of the Batur Jaya Cooperative (KBJ) which has made many changes to business development so that it is able to enter the supply chain of the automotive industry,” said Airlangga on Friday 22 March 2019.

Since January 2019 KBJ has produced 200 cylinder sleeves (parts of piston rings) per month and supplied them to PT TPR Indonesia as the second tier supplier of PT TMMIN. This success cannot be separated from the support of various parties, including PT TMMIN which provides assistance to KBJ. In addition to concentrating on advocating the cooperative, PT TMMIN also donated five production machines in the form of spectrometer machines, core making, moulding, small NC milling, and small milling.

“With good planning, combined with training and mentoring through the right methods for approximately two years, the SME and the cooperative eventually manage to enter areas that require high requirements ranging from quality, productivity, technology, and supply continuity,” he said.

The SME that processes metal products comprises some 300 small entrepreneurs, of which some 150  are members of the cooperative. “From the metal cluster here, there are 4,000 workers in total, and of course this is an important part of the development of the SMEs. For this reason, we thank Toyota for intensively cooperating with the Batur Jaya Cooperative,” he said.

The Minister of Industry added, this partnership was also a strategic step to revitalize production facilities at KBJ. “Two and a half years ago I came here and have been here three times, I see the progress and today I see the changes are ready to accept orders from both Toyota and other big businesses like Panasonic,” he said.

According to Airlangga, the cooperative has been performing transformation in the production system so that it has been able to keep up with large-scale manufacturing demand properly and correctly. “So, it already has competitiveness and has been included in the Toyota ecosystem, which is also expected to increase the volume of KBJ,” he said.

The Minister expressed his appreciation and appreciation to PT TMMIN for its support in strengthening and advancing automotive SMEs in Indonesia. “This achievement is expected to be an inspiration for the progress of other potential metal SME centers,” he said.

In establishing partnerships between SMEs and suppliers of carmakers, it requires the availability of skilled human resources (HR), machine technology and equipment, technical production, and raw materials. To meet these needs, the Ministry of Industry will focus on the development of metal centers in Indonesia, including Ceper (Central Java), Tegal (Central Java), Yogyakarta, Sukabumi (Wesy Java), Purbalingga (Central Java), Semarang (Central Java), Pasuruan (East Java), Sidoarjo (East Java), and Jakarta and its surroundings (Jabodetabek). “The centers will also be directed towards becoming a logistics center, material center and R & D for the surrounding SMEs,” said the Minister of Industry.

He noted, in 2018, the transportation equipment sector contributed 1.86 percent to national GDP. In the same period, the production of four-wheeled vehicles or more reached 1.34 million units and total domestic sales amounted to 1.15 million units. He hopes, the SME is projected to be able to expand the market network, diversify products, establish partnerships with large industries, and increase exports.

On the same occasion, the Director General of Small and Medium Industries and Multifarious Industries (IKMA) of the Ministry of Industry Gati Wibawaningsih, IKM partnerships with large industries in the form of assistance and assistance from both production and management. General Chairman of the Batur Jaya Cooperative (Badrul Munir) expressed his gratitude for the Ministry of Industry’s efforts in supporting the success of the SMEs in the regency. He thanked PT TMMIN for its supports of technicians to provide training to the cooperative. (*)