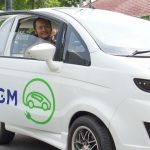 JAKARTA – Around 1,500 component industries in the country are encouraged to produce components of electric vehicles so that they can contribute more to the use of domestic components.

“This step is to educate our 1,500 (companies) that produce component industry to switch to producing fuel electric vehicles,” said the Head of Industrial Facilities and Infrastructure Sub Directorate of Land Transportation Equipment of the Directorate General (DG) of the Metal Industry, Machinery, Transportation Equipment and Electronics, Ministry of Industry (Kemenperin) Andi Komara, in a discussion on Accelerating the Development of Low Carbon Emission Vehicles at the State Secretariat, Jakarta.

He said that diesel vehicles have been refueling B20 since 2016, and the adoption of B30 is boosted in 2020. Until 2017 the automotive industry produces nearly one million vehicles and exports nearly 200 thousand low carbon ice technologies. We increase again with the low carbon emission vehicle (LCEV) programme. “We push hybrids and fuel cells,” he said.

The investment that came up to LCEV was up to Rp. 15 trillion and created 200 thousand jobs for fuel electric vehicles. “Inevitably our global trend is electricity. So we must encourage our industry to produce electric vehicles by increasing the use of local components,” he said.

His side is reviewing so that the electric vehicle products that are being developed can be adjusted to the current per capita income of the community. He said electric vehicles are still very expensive at this time. (Antara)