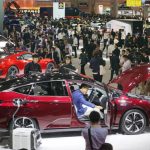 JAKARTA – The Association of Indonesian Automotive Industries (Gaikindo) believes car sales by the end of 2018 can penetrate 1.1 million units. “As of August 2018 it has reached 765,000 units, that is a very good number,” explained Johannes Nangoi, General Chair of GAIKINDO.

According to him, the average car sales reached more than 100 thousand units per month in 2018. He added, if the figure continues to be maintained and even increased by four months, then the target of 1.1 million units will be easily achieved. Moreover, automotive sales in the second semester are usually higher than in the previous semester.

He said that the recent weakening of the rupiah against the US dollar enabled the brand holder agent (APM) to hoist the selling price of the car. Although the policy depends on each APM.

“If the rupiah continues to weaken like this, maybe there could be an increase, because most of the components used by the automotive industry still depend on the dollar, only the policy is each, yes,” he said.

According to Johannes, despite the weakening of the rupiah, the automotive industry was helped by economic improvements which can be seen from the growth in sales of transport vehicles. “If the transportation goes up, it will automatically drive the increase in passenger vehicles as well,” he said.