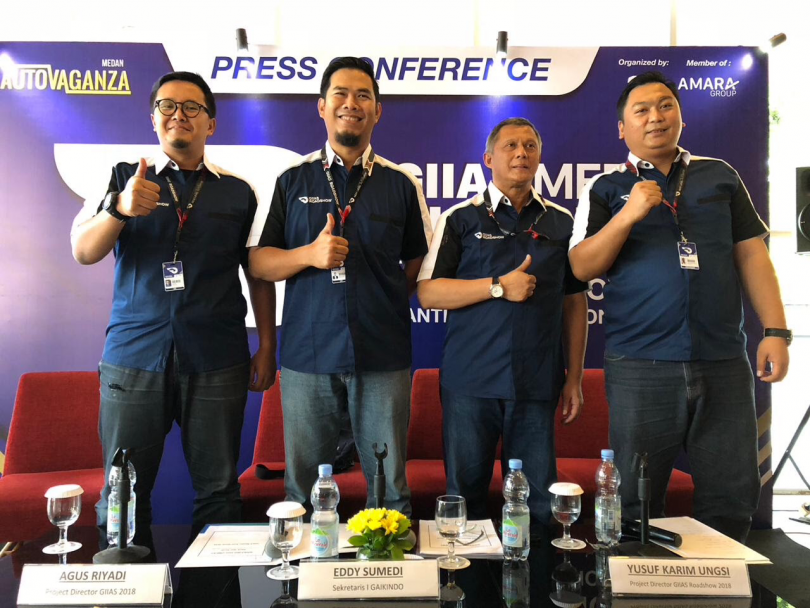 Medan (North Sumatra) was chosen as the closing event for the 2018 GIIAS Roadshow event. The exhibition will take place for five days at Santika Convention Center, from 31 October to 4 Novembe 2018. In general, North Sumatra is one of the largest existing four-wheeler markets in Indonesia to date.

“At present North Sumatra is a sales contributor – retail – the largest car on the island of Sumatra, Riau has just been followed,” said GAIKINDO Secretary I, Eddy Sumedi in Medan, Tuesday 30 October.

He added, GAIKINDO targeted Medan as one of the cities focused on raising the local automotive industry outside Jakarta. Based on data that he described, North Sumatra contributed four percent of the sales of four-wheeled vehicles since 2016. “So this year we predict car sales can be 1 million units, about 30 of them from North Sumatra,” he said.

Eddy explained that the contribution from North Sumatra was ranked seventh nationally and the largest outside Java.

Bearing the title ‘End of Year Price Party‘, the Medan GIIAS 2018 is expected to encourage the sale of four-wheeled vehicles in North Sumatra because it will be attended by attractive offers from several brand holder agents (APM) and automotive supporting products.

The 2018 GIIAS Medan Project Director Yusuf Karim University explained that there are at least 30 exhibitors in this event. “They are Mitsubishi, Lexus, BMW, Chevrolet, Honda, Daihatsu, and Wuling, and 23 others are automotive supporting products,” he said.

During the exhibition there will be more interesting treats from APMs for car purchase compared to buying at a dealer or at a mall. “Mitsubishi has promised a number of low-cost and free window film programs while Wuling is offering a lottery for every car purchase,” he said.

In 2017, the GIIAS Medan managed to attract more than 20 thousand visitors and the total units sold reached 600 units. This year, although it does not target specifically, it is estimated that the same number of visitors and the addition of sales of 700 cars can be achieved.

The GIIAS Medan 2018 is also expected to be able to attract young people to be able to come and enliven this event. Therefore, not only automotive brands are given a place to perform, especially in Medan, the organizing committee has provided a special place to display classic cars from the community named ‘Medan Tempo Doeloe‘ (The Old Medan Scenes) area.

Two-wheeled vehicles, in particular the modified motorbike and the builder also got their own show place and at the Builder Gathering Meet Up area. “Based on the results of last year’s evaluation, the majority of those who came to the exhibition were business man and family. Even though the segments of their youth are still very potential. Therefore we try to expand through this method.”